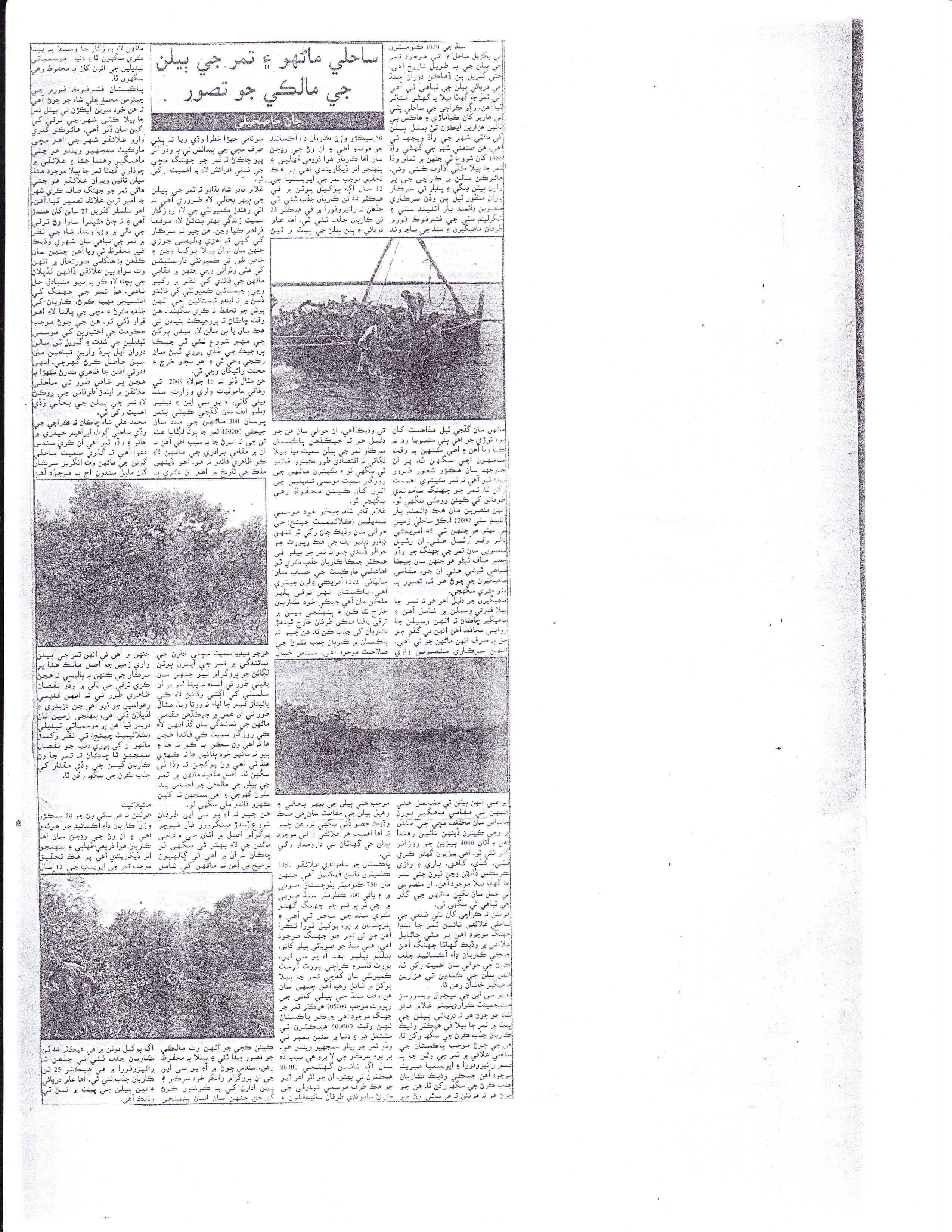 This story focuses on the Current Status of mangroves in Pakistan. Sindh government, IUCN, WWF Pakistan claim to have covered now 105000 hectares quite recently (2012), but they could not involve local community with offering them incentives. Due to this approach of certain authorities, they could not generate results for conservation of mangrove
 Sea intrusion has taken away 2.2 million acres of fertile land, causing widely displacement of local communities and destruction of mangrove forests
 Federal Environment minister of Pakistan with the help of Sindh forest department, IUCN, WWF claimed to have broken record by planting 450,000 mangroves plants through 300 planters near Keti Bunder coast in Thatta district on July 15, 2009. After three years there are hardly few plants on the site, while others have perished due to various reasons, mainly because of lacking proper care, unavailability of fresh water.
 The experts believe that the authorities could not involve the community for the identification of fertile site and have ownership for conservation
 The campaigners demand releasing at least 33 million acre feet (MAF) water from the River Indus to Indus Delta to save natural resources as two million people depend on the Delta for livelihoods, like fish catch, cultivation and animal grazing
 There are two mangroves species along 1050-km long Pakistan coast, which h include Rhizophora and Avesenia Marina
 The experts shared the available data with capacity of both species for Carbon storing in comparison with Riverine forests: Avesenia have capacity to store 44 ton carbon per hectare while Rhizophora per hectare stores 25 ton carbon. This shows how Pakistan has potential to contribute more in avoiding negative impacts.
 IUCN Coordinator for Natural Resources Management Ghulam Qadir Shah contributed his experience and learning in the context with Climate Change and the importance of community involvement
 IUCN is going to launch Mangroves for Future program soon with the involving of communities. This is said to be favourable initiative to increase mangroves plantation cover. This initiative, apart from mangrove plantation, will introduce trainings for the communities for forest management
 Chairperson Pakistan Fisherfolk Forum Mohammed Ali Shah, who led the struggle for mangroves conservation gave his input, achievements and government approach. Karachi Port Trust (KPT) and Port Qasim, which both have been established at the sites of once thick mangroves forests, now claim their major contribution in mangroves plantation.
 Shah belongs to coastal community and eyewitness of depletion of mangrove forests in the name of development, urbanization etc.
 Urbanization in Karachi started since 1986
 Two major projects with foreign funding were opposed widely by Pakistan Fisherfolk Forum, which include Diamondbar Islands City planned on 12000 hectares of mangroves and the other Sugarland City in the other part of coastland. The projects have been delayed but the campaigners are still unsure, thinking the government may launch it sooner or later.
 4000 boats move daily from the government-designed projects to these creeks for fishing

 The areas like creeks where mangrove forests exist also pointed out in this piece
 One side the government claims to have initiated projects for mangroves rehabilitation while the other certain land mafia people are involved in reclamation of mangrove lands
 Recommendations include the involvement of communities with clear incentives for them so they show the ownership for forests conservation
Pakistan has potential to contribute more to avoid the disasters, but it needs political will to justify its role and responsibility
 These mangroves not only are natural shields to avert cyclone and tsunamis but also are breeding grounds for commercially important fish species, shrimps etc
 These must be protected through initiating policy guidelines for developers, community and other government institutions