The climate conference in Doha last week was another missed opportunity to stop the catastrophic warming of the planet. Known by its wordy official name, the 18th Conference of Parties of the United Nations Framework Convention on Climate Change (UNFCCC), was also confined to just that: words.

The Doha Climate Summit failed to set significant emission goals and concrete financial commitments to arrest emissions. The future of those countries most vulnerable to climate variability is now hanging by the climate cliff.

Far away from the energy-intensive desert capital of Qatar, the world’s largest producer of natural gas, here we are in the lush mountains of the eastern Nepal district of Ilam. Farmers are already feeling the effects of climate change, with erratic monsoons, unseasonal rains and freak storms. But farmers cooperatives are working to build resilience so that they can cope with the extremes of weather.

The Namsaling Community Development Center (NCDC) has formed farmers’ groups in the villages of Ilam to build locally managed weather stations that helps them keep daily records. The farmers were given short training on the use of the instruments and are now keeping a ‘Climate Diary’.

“The farmers are now able to understand the weather patterns and the consequences to some extent without being introduced to the term and concept of climate change,” explains Yogendra Lal Shrestha of NCDC who have installed mini weather stations to record temperature, humidity and rainfall.

Schools in Ilam also have climate diary projects in which they record weather conditions and link it to the health of the students. “We are trying to analyse weather conditions of the months when the students record highest absence from school due to illness,” says Chitrakala Baraili of Saraswoti Niwas Lower Secondary School in Kanyam village. They hope that interpretation of data will help students take precautions during certain months to avoid missing school.

The rain gauge, thermometer and the hygrometer are monitored twice a day by representative of each farmers’ group. At the end of each month they also plot the number of cloudy days, thunderstorms, and rain to discuss at fortnightly meetings.

For Saraswati Khulal, 21, of Bhanjyang taking weather records has become a daily ritual. With technical assistance from NCDC she has learnt how to read the instruments. “Not just me but everyone in my family have now learnt to make measurements,” says Saraswati who says 17 households of Bhanjyang Farmers’ group have shown more interest, to analyse and draw a correlation to their harvests. 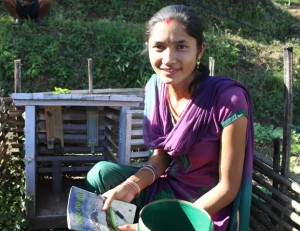 Saraswati Khulal at the mini weather station in Bhanjyang, Ilam

Officials hope that in 2-3 years farmers will be able to correlate weather conditions with plant diseases as well as to human health. They hope to be able to predict and adapt to erratic weather and climate variability.

Saraswati’s father-in-law, Narayan Khulal, 70, who takes up her responsibilities when she is away from home, says the climate diary has made him all the more sure about changing weather conditions. Says Khulal: “The fog period has extended significantly compared to the past and so has the humidity and cases of fungal infection on plants and we now have it on record.”

He also says that the growing use of artificial fertilisers have affected harvests. “Earlier the diseases that could be cured using ash and animal dung are now resistant to even strong pesticides,” he says.

Khulal like many other families in Ilam has gone back to the traditional organic farming methods, and he hopes that with the climate diary they will be able to spot at least some trends in weather patterns and be prepared so they don’t lose the market values of their produce.

While the implementation of local adaptation plans for climate vulnerable communities in the impoverished far-and mid-western region under the National Adaptation Programme of Action (NAPA) is finally taking off, farmers in Ilam are well on their way to building capacity to adapt to the wrath of the nature through their own efforts. 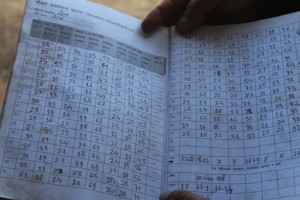 The Ghunsa helicopter crash on 23 September 2006 devastated Nepal’s nature conservation movement by taking the lives of 24 people, among them six of Nepal’s pioneer conservationists. Six years on, the void is slowly being filled by community-based environmental groups who are protecting the legacy of putting local people at the centre of conservation activities. http://nepalitimes.com/issue/2012/09/22/Nation/19647#.UJJQPWmH7yC