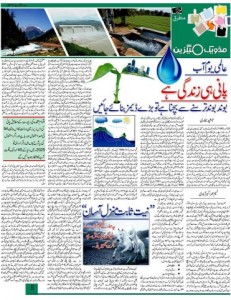 story about PROTECTION OF GREEN TURTLES EGGS. near about 1000 turtles came in pakistan karachi beach .each turtle give a 100 eggs during augest to november .pakistani beach best beach all over the world for turtles beading .

The Industrial Waste of the Kothri and Nooriabad are present in the water of KB Feder to Kanjhar lake,which are dangerous for the human being and the underwater species.The solutions were made for this problem but it was temporary,the industrial waste and poisionous water will again enter in to the Kanjhar lake.The Managing Director of Karachi water and saverage board seriously said that after the notice from Department of Environment and Industry for the last two years ,there were no steps taken to solve this problem

Industrial affluent is entering in in Keenjhar Lake and other water resources, Climate Change is also affecting the water resources – Seminar
Karachi (Jamshed Bukhar): Due to Climate Change and by not protecting the water resources and wetlands, Pakistan will face acute water shortage in the future. Besides, it can also affect the crops which can create food shortage. These thoughts were expressed by the speakers at a Seminar organized by IUCN (an international organization for the protection of nature) in collaboration with the Sindh Coastal Development Authority and Fisheries at Keenjhar Lake (Thatta) on the World Wetlands Day.
Besides, students of the colleges, various experts from different sectors also participated in the Seminar.
Mr. Mahmood Akhtar Cheema, Country Representative of IUCN Pakistan, Mr. Shamsul Haq Memon, Consultant, Sindh Coastal Development Authority, Director General Fisheries, Sindh, Mr. Ghulam Mohammad Meher and Project Director, Sindh Coastal Development Authority also spoke in the Seminar, whereas Director General, Sindh Coastal Authority, Mr. Muhammad Pathan was the special guest at the occasion.
Mr. Mahmood Akhtar Cheema said that consumption of water has increased with the increase in the population. We used to have per capita 5,000-6,000 cusecs of water which has been reduced to 1,000 cusecs. Due to Climate Change and improper system there will be shortage of water. Sometimes heavy rains can cause floods and sometimes dryspells can affect the crops.
Shamsul Haq Memon said that conservation of wetlands is extremely important for the economic development. Wetlands are not only major source of food, but also provide wood and fodder for the cattle and other needs of life. They provide livelihoods to thousands of people. But now the wetlands are facing a lot of threats due to Climate Change. They are facing natural and man-made calamities. Ghulam Qadir Shah said that Pakistan has 230 wetlands out of them 46 are protected areas spanning over 1500 hactres of land. These wetlands play crucial role in the growth of mangroves. A patch of 600 meter mangrove forest can reduce the effect of the Tsumani wave upto 80%. These wetlands provide habitat to a lot of animals. Now the affluent from the Kotri Industrial area is being released into Keenjhar Lake which extremely hazardous for human health. They said that if the protection will not provided to the wetlands, the coming generations will face a lot of problem in the future.

The numbers of Siberian migratory birds recorded decreased due to poaching and climate change, although. These birds are now began go back, but Sindh Wildlife Department or any authority have no any certificate the records of these evacuee birds.

The data of these migratory birds can not be release as yet, although their arrival started from October. A large number of exotic & colourful birds including Harriers, Kindfishers, Flamingos, Falcons, Geese, Swans, Cranes, Mallards, Waders, Cormorant, Mallards, White Ibis, Herons , Spoonbills, Egrets and Flamingos spend their migrated periods at the wetlands of Khyber Pakhtunkhwa, Balochistan, Punjab and Sindh. These birds also spent 4 to 5 months at Guddo Barrage, Drigh Lake, Lake Mancher , Haleji Lake, Khanjer Lake and adjacent areas of Indus Delta.

Lack of proper maintenance of the said Wetlands by the number of birds has decreased significantly. According to the wildlife experts now these beautiful birds migrating India and Iran instead Pakistan. During the decade of 80’s and 90’s more than 12 million and 670 species of migratory birds arrived at the said lakes from Indus Migrated Route No.4

They Birds comes here from Siberia for search of food through a distance of 4 thousand kilometers off the coast of Pakistan and, to descend rivers and wetlands in Pakistan. In the first phase, the birds stay at the lakes in Kazakhstan followed by different ranges of Karakoram in Pakistan.

The numbers of Siberian migratory birds recorded decreased due to poaching and climate change, although.
From 1986 to 1990, the largest bird stay at the lake Haleji, where installed a Birds Ranking Station, put on the rings in foot of some birds. In the 90 decade there was 223 species & 2 million birds arrived at the Lake Haleji. However, the shortage of water into Lake Haleji and poaching has reduced the numbers of Birds, while numbers of birds in the Lake Khanjer also decreased. These birds also sold in the different area in Badin

The wildlife experts say that if there was not stop the illegal hunting of birds in Sindh the arrivals of the migratory birds will be turned off.

Environmental pollution and human activities without proper maintenance mistreatment and neglect of Sindh Governement departments, the Wetlands of Sindh are now losing their existence. Due to negligence the irrigation Department, Sindh Wildlife Department & EPA Sindh (Environment Protection Agency ) Manchar, Khanjar, Jaboo Lagoon, Dock Lagoon & Haleji Lake have posed serious threats, due to shortage of water and aquatic life in the lakes, inflow record of birds has decreased. According to experts if serious action will not be taken the Sindh pose a serious shortage of Water in the future including depletion of aquatic life and fear that peoples will be unemployed.

The authentic sources told to the “ Jang “ that the construction activities around the lake Khanjar, the biodiversity of the lake has been the victim of threats and polluted industrial water and city sewage has contaminated the lake Khanjar. Agricultural and industrial waste as well as human health has been severely damaged aquatic life.

Recently, experts have recommended more water for lake Haleji, the said lake is also have a rank of protect game sanctuary, situated 3 Kilometer from National Highway.

Manchar which is a largest lake in Pakistan have server threats. In 2010, the incompetence Department of Irrigation its one Dam damage which is not yet re-construct.

The construction work still can not starts at the bridge of Zero Point , MC & AFP.

The three doors of Danstruah were not repaired for last 37 years. In 1994 the doors of Danstruach were broken which was a great diaster. Government ofPakistan must take proper care of these historical sites If proper actions were not taken these beautiful Wetlands will lose its importance.