This story focuses on the status of soil fertility in Sindh province of Pakistan. Sea level rise has grabbed around 2.2 million acres land. Cyclones, fresh water shortage and frequent flood in the coastal areas together contributed to ruin the fertility of land and destroy natural green pastures. This has forced hundreds of families to migrate from one place to the other in search of better living. Fertile land in more than seven districts of the province is said to be affected largely. Farmers are unable to cultivate pieces of family land.

Similar is the issue in northern districts of the province, which have become prone to floods consecutively for the last three years. Farmers could not cultivate wheat crop because flood water is still standing in the wide area. There are fears that Sindh will lose further cropped area because of the recently emerged flood issue.

Pakistan government had launched Bio-Saline Agriculture project for Larkana division, the area presently has been affected badly by the flood. The objective of the project was to introduce crops feasible to cultivate in the saline-affected land. But unfortunately, the national project has been stopped in Sindh. Since the delta crops –Paddy and sugarcane–have been destroyed by the flood as 5-6-ft water is still standing there.

Water table in the flood-hit districts was already up. Hence, the stagnant water will damage its fertility.

Infrastructure development after occupying natural water ways by politically influential people is said to be the main cause of flooding, destruction and displacement. That is why presently there is no outlet for the flood water. There is no proper drainage system in urban settlements.

The government had diverted the flood water to draining out it through Right Bank Outfall Drain (RBOD)-1 and III to avoid further loss. But the situation is still alarming due to standing water all around.

Since the volume of water is immeasurable, nobody can guess when the lands will be made cultivable.

Flood loss updates reveal that crops standing on 245,459 acres have been destroyed in Sindh with 3,166,023 persons affected. Majority of the flood-affected people belong to farmer communities, which are vulnerable to face the hardships because of recent destruction and displacement.

In result, there are fears of another disaster of food shortage. Measles is major disease among minor children in these affected areas and doctors say it is happening because of malnutrition. There are confirmed deaths of more than 36 children, quite recently when the wintering season started. If the government failed to take serious actions, it may cause more loss. They suggested to ensure Vitamin A supplementation to avoid further loss of children.

The demands include the government should take the matter seriously, enabling farmers to cultivate sunflower and other crops in the next immediate crop season. 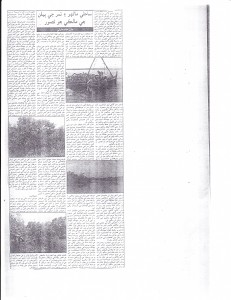 Mazar Shar, an elderly chieftain of the Mazar Shar village, and his fellow natives were saved miraculously, after five days of being marooned, when they found a rescue boat that shifted them to Dera Allahyar town, Balochistan province. http://www.thenews.com.pk/Todays-News-4-133425-Marooned-villagers-saved-after-five-days

Snake-bite incidents are on the rise recently, as these reptiles have been displaced from their natural habitat following heavy rains in various parts of Sindh. http://www.thenews.com.pk/Todays-News-4-131823-Snake-bite-incidents-on-rise-after-rains

The changing rain pattern is having disastrous effects on numerous species of indigenous birds, with many of them being unable to breed due to this year’s delayed monsoon rains. http://www.thenews.com.pk/Todays-News-4-129652-Habitat-breeding-patterns-of-birds-being-affected-by-climate-change