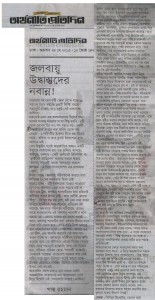 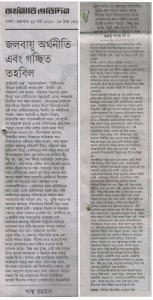 DHAKA (AlertNet) – Bangladeshi Foreign minister Dipu Moni is nothing if not optimistic. Asked about the possibility of agreeing with India on the fair distribution of water from the Teesta river, she insists that “We are hopeful of having a balanced treaty for Teesta water sharing between our two friendly countries.”

But Moni’s upbeat tone is not shared by those who live on the banks of the river in the north of Bangladesh. They say the flow of water from India, where the Teesta originates, is falling, leaving them short of badly needed water for irrigation and affecting rice production.

“The shortages of water are enormous and we are the main sufferers from that,” said Oliur Rahman, a farmer from Nilphamari district. “Things are changing rapidly.”

Bangladeshi experts claim that India is taking too great a share of the Teesta’s flow in an effort to shore up its own water security. The river flows for 315 km (197 miles), 130 km (81 miles) of which are through Bangladesh.

India “built a barrage at Gazaldoba (on the Teesta) and is taking a huge amount of water for their cultivation,” said Ainun Nishat, a water expert and vice-chancellor of BRAC University in Dhaka.

The worsening water shortage means the Teesta Irrigation Project, built in Bangladesh in the 1980s, is no longer functioning, said Mohammed Mainuddin, a Bangladeshi hydrologist and research scientist working in Australia.

Lower water flows on the river are “having a serious impact on agricultural production and the livelihoods of millions of people living in the area,” he said, and are leading to a build-up of silt in the riverbed, which is decreasing the river’s capacity.

“If this continues for long, in the future the river may not exist or may disappear like many others small rivers in Bangladesh,” Mainuddin warned. “I think the main and maybe the only cause of water shortages on the Teesta in Bangladesh is the diversion of water upstream in India.”

However, changes in rainfall patterns, linked to climate change, may also be reducing the river’s overall flow, some experts say.

Agreeing a deal to share the Teesta’s waters equitably is one of Bangladesh’s highest priorities in its relations with neighbouring India. A treaty was on the verge of being signed last year during a visit by India’s prime minister, but was postponed at the last minute when Mamata Banerjee, chief minister of the Indian state of West Bengal, pulled out.

Because the Teesta flows through West Bengal, the state must give its assent to the treaty before the federal government can present it for signing.

“Mamata denied the deal by saying it’s unfair, while Indian critics or columnists are writing (that) Mamata was trying to pressure Indian central government to (provide) more financial assistance for her province,” said Amena Mohsin, professor of international relations at the University of Dhaka.

He believes that “Teesta is just a game for her.”

While details of the treaty were not officially made public, there was speculation that an agreement had been reached to assign 48 percent of the Teesta’s water to Bangladesh and 52 percent to India, but that Banerjee was demanding 75 percent for her country.

Commenting on the treaty deadlock, Nishat, who was an architect of the 1996 Ganges Water Sharing Treaty between Bangladesh and India, said, “Since there is so much politics surrounding it, a political consensus on the issue is essential.”

“We set up a treaty for Ganges water-sharing by setting up a goal based on some common ground of interests,” observed Nishat. “But this time it’s really difficult, especially where a third party (Banerjee) is involved.”

Many in Bangladesh feel aggrieved by Banerjee’s hardline stance. But Gowher Rizvi, an adviser to Bangladesh Prime Minister Sheikh Hasina, stressed his country’s long-term friendship with India and said that both nations were trying to carve out a win-win situation.

“We are not frustrated with our neighbour but both countries are waiting for a mutually beneficial treaty which, I hope, will happen soon,” Rizvi said.

However, one foreign ministry official who requested anonymity, was less sanguine.

“Bangladesh is the helpless victim in this wrangling and the Teesta treaty is being used as a bargaining chip,” the official said.

“Teesta River and it’s impact on the Bangladesh’s environment and climate. 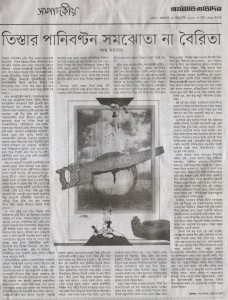 m, India and then it’s flow towards Bangladesh. Almost 30 million Bangladeshis are depending on that river water in many ways. Farmers, who produce rice and other crops used to use that water for their irrigation. But now a days water is coming less then before. Bangladesh claimed this shortages is destroying Bangladesh and country’s farmers. They also claimed; India is diverting water from their part; as they are the upper riparian side. For this shortages affected climate & environment of this country, which is overwhelming.”

This story is in Bengali and it’s all about the food security of Bangladesh. Due to climatic change Bangladesh is facing some problem of rice cultivation and therefore rice production in Bangladesh reducing day by day. But food & disaster … Continue reading →