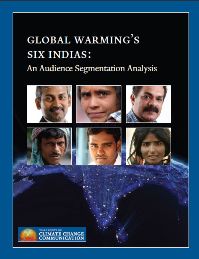 Almost a quarter of India might be personally experiencing the impacts of climate change, if a new study by Yale University in the US is to be believed. And about 16% of the country might never have heard of climate change, according to the same study.

A research team from the Yale Project on Climate Change Communication in collaboration with a couple of groups based in India conducted a representative national survey of 4,031 Indian adults — urban and rural — to investigate the current state of public climate change awareness, beliefs, attitudes, policy support and behaviours. The survey also noted public observations of changes in local weather and climate patterns and people’s self-reported vulnerability to extreme weather events.

The team led by Anthony Leiserowitz of Yale University reports that ‘the experienced’ (at 24%) form the largest group emerging out of those surveyed. They might not know too much about climate change but are convinced that it is happening and is a serious problem. This is partly because they have personally experienced the impacts more than any other group, according to the report made public this month (May, 2013).

The survey, carried out in November and December of 2011, found six distinct audiences within the Indian public that responded to the issue of climate change in very different ways. The Yale group divides them into: the experienced (24%), the informed (19%), the disengaged (16%) the undecided (15%), the unconcerned (15%) and the indifferent (11%).

While the ‘informed’ group is the most aware and convinced of the danger of climate change and highly supportive of national actions to mitigate the threat, the ‘undecided’, ‘unconcerned’ and ‘indifferent’ represent different stages of understanding and acceptance of the problem.

The ‘disengaged’, however, were found to have never heard of climate change and had no opinion about it, even when the phenomenon was described to them.

Leiserowitz says the report provides fodder for public climate change communication and interventions which must recognise that people are different and have different reasons for acting or not acting to reduce greenhouse gas emissions and prepare for the impacts of climate change.

The report builds on findings of another such survey by the team that looked at the global warming knowledge of Indians, their risk perceptions, personal involvement, and support for national action.

The team says though the representative findings cannot reflect the full diversity and complexity of Indian society, they do categorise the different audiences within the Indian public that respond to the specific threat of climate change in very different, yet patterned ways.