Climate change is increasing the intensity of extreme weather events

Far from being isolated, the Philippines typhoon Haiyan followed other extraordinary meteorological events that are becoming more frequent and increasingly severe Three weeks ago the most powerful typhoon ever recorded to hit land destroyed parts of the Philippines. The devastation has been catastrophic, flattening homes, schools and hospitals and leaving thousands dead and 5.5 million children affected.

Unicef has worked in the Philippines since 1948 and experienced staff returning from the worst affected areas such as Leyte are reporting having never seen anything like this – not even after the Asian tsunami on Boxing day almost a decade ago. They have seen hundreds of kilometres of coconut groves literally blown away by 300kph winds. A coconut tree takes 12 years to grow, so this is a decade of livelihoods wiped out in a single storm.

I am incredibly concerned about the children who are without a doubt the most vulnerable right now. But as the immediate shock of the typhoon news reports begin to fade from people’s memories we need to address with energy and decision the true facts behind the intensity of the Philippines typhoon.

If the Philippines typhoon was an isolated incident, it would be a meteorological phenomenon, but the real worry is that far from being isolated, these events are both frequent and increasingly severe. This typhoon comes on top of other extraordinary meteorological events that have occurred recently; unprecedented floods caused by a cyclone in Sardinia last week; unprecedented typhoons in the United States a few weeks ago; unprecedented rains that caused the Pakistan floods in August and last year.

We can not turn a blind eye to the stark reality; the reality that is climate change. Leaving aside the appalling individual tragedies that have occurred we must see that these are flashes of the future. Climate change is contributing to these events becoming more intense.

Hazards only become disasters when a population or society’s capacity to cope within existing resources is overwhelmed. In such a situation, children, especially the hardest to reach, are always the most vulnerable. Disasters put children at greater risk of death, exposure to disease and trauma, and disruption to their education and social development.

As disasters intensify with increasing impacts of climate change, there must be an expansion of adaptation and resilience programmes in vulnerable countries to protect children from risk. Unicef’s disaster risk reduction programmes implement simple measures like early warning systems which can mean the difference between life and death. These programmes work – the Indian state of Orissa’s disaster preparedness plan implemented last month undoubtedly saved lives as nearly a million people were evacuated when a cyclone was known to be heading towards the eastern coastal region.

Last weekend the UN climate change talks ended in Warsaw. The Philippines disaster should have sent an urgent message demanding bold action to protect children from disasters like these and delivered plans for how we can effectively rebuild when the worst happens, but the lack of energy has left me speechless. I can not believe we are not yet gripping this issue with the urgency that is needed and unless we do that, what you see isn’t going to be one event that shocks and saddens us but an event that is repeated and repeated and repeated.

I’m not saying that human beings alone are causing global warming, they’re not. The Earth is going through one of its warming cycles, but there is no doubt, none whatsoever, that human beings are adding to that and adding to that in a dangerous and ultimately fatal way. Unless we begin to take this seriously, according to experts, climate related disasters could affect 375 million people every year by 2015, up from 263 million in 2010. 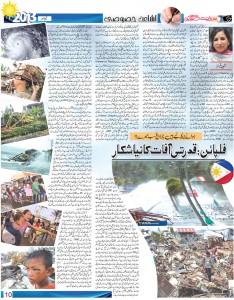