With unpredictable weather conditions, such as erratic rainfall, fluctuations in temperature and changes in relative humidity affecting crop output, the Weather Based Crop Insurance Scheme (WBCIS) offered by various private and public sector companies is gradually being accepted by farmers seeking protection from crop losses.

The scheme, piloted in the states of Punjab, Haryana, Rajasthan, Madhya Pradesh, Rajasthan and Uttar Pradesh in rabi of 2007, has, for the first time in the country, given farmers a cover against crop losses from adverse weather conditions.

As per AICI data, the weather-based product scheme, when implemented across 13 states in kharif 2012 and 14 states in rabi 2012-13, had insured 35 lakh and 37 lakh farmer, respectively.

“Although the share of weather-based crop insurance scheme amongst farmers opting for output-based insurance cover is small, it has caught on as it’s easier for the states to administer — we need not do a crop-cutting exercise needed for the implementation of national crop insurance policy. What we need to know is the weather condition of a given area during the life cycle of the crop,” PJ Joseph, chairman and managing director of AICI, told FE.

Joseph said new products like weather -based insurance provide protection to cultivators in the event of a loss in crop yields resulting from adverse weather incidences such as unseasonal or excess rainfall, temperature fluctuations, frost, relative humidity etc. “Triggers are broadly fixed so as to capture the adverse incidence of weather parameters on crop yield,” he said.

So far, only about 30 million farmers out of 120 million have been covered under the National Crop Insurance

Scheme, which mainly covers yield losses. About 70% of these are accounted for by farmers who own less than four hectares.

For the national crop insurance scheme, companies provide coverage based on yield, for which historical yields of the crops concerned are taken into consideration while for weather-based insurance, the historical data of yield is not needed.

The Comprehensive Crop Insurance Scheme (CCIS), introduced in 1985 by the centre in collaboration with state governments, was linked to short-term crop credit, where all loans for notified crops in a specific area were compulsorily covered.

Close to 60 lakh farmers benefited from the CCIS and the majority of claims were paid in states such as Gujarat, Andhra Pradesh, Maharashtra and Orissa. 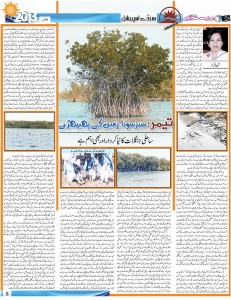 Sandip Das Nov 26, 2013
New Delhi : Horil Singh, a farmer from Rajapakkar village of Vaishali district in Bihar, has been seeing fluctuations in rainfall pattern and temperature for almost a decade now.This has impacted his paddy and pulse produce to a large extent till a global initiative launched in 2010, to help small farmers in dealing with climate change, helped him in creating vertical drainage systems that let excess rainwater seep quickly back into a natural acquifer.

Vikas Chaudhary, a farmer from Karnal in Haryana, has adopted conservation farming methods such as zero tillage, direct seeding and soil health-based fertiliser application for the last three years.

Many farmers in the two districts of Bihar and Maharashtra have been trained on the usage of technology such as increasing carbon content in the soil through agro forestry, manure management and optimum application of nitrogen through ‘crop sensors device’, which saves cost and keeps in check greenhouse gas (GHG) emissions.

Through collaborative efforts of various international agencies including ministry of agriculture under Research Programme on Climate Change, Agriculture and Food Security (CCAFS) platforms, hundreds of farmers have been trained on various agronomic practices that save the crop from excessive rains and drought through ‘climate smart’ villages concept.

“With encouraging response for the climate smart villages concept, the programme would be implemented in Maharashtra in a larger scale shortly,” Pramod Aggarwal, Regional Programme Leader, CCAFS told FE

He said the focus of climate smart village programme has been integrating available local knowledge on conservation technique along with global prospective on climate change mitigation. “We want more villages to adopt these techniques,” Aggarwal said.

Concerns about how climate change may be affecting India are bringing fresh urgency – and funding – to longstanding challenges in sustainable agriculture. A number of new efforts are combining water and soil conservation measures along with access to better seeds and information to help farmers cope with more erratic weather. Read story here.