NAIROBI/ISLAMABAD: On a fact-finding mission to Kenya, film actress Li Bingbing–one of 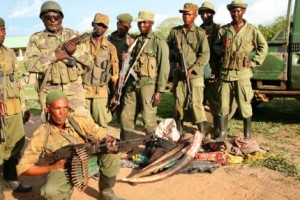 Li Bingbing said citizens and the business community in Asia can play a crucial role in preventing the illegal killing of elephants in Africa by saying no to ivory products.  The major recent spike in elephant killings–now at their highest levels in around a decade–is threatening the future of some elephant populations and the livelihoods of millions of people linked to tourism.

The visit marks the first overseas engagement for Li Bingbing, recently named ‘Asian Star of the Year’ by Variety magazine, in her role as Goodwill Ambassador for the United Nations Environment Programme (UNEP). A dedicated environmental campaigner, Li Bingbing founded the L.O.V.E Green Movement in 2009 which encourages Chinese citizens to adopt resource-efficient, low-carbon lifestyles. She has extensively promoted the Think.Eat.Save: Reduce Your Foodprint campaign by UNEP and partners across social media networks in China. The campaign aims to reduce food waste and food loss worldwide.

Earlier today, Li Bingbing visited the renowned David Sheldrick Wildlife Trust near Nairobi, where young elephants, many of whom have been orphaned due to poaching, are cared for and often returned to the wild.

“The current poaching crisis raises major concerns about the survival of elephants and rhinos here in Kenya,” said Li Bingbing during a press conference at UNEP headquarters in Nairobi.

“But there are also other, far-reaching impacts. Illegal killings of elephants are being linked to organized crime and the funding of armed militia groups. Many consumers in Asia do not realize that by buying ivory, they are playing a role in the illegal wildlife trade and its serious consequences. As global citizens, we need to take responsibility by learning more about the potential impacts of our lifestyle choices,” she added.

A regular on red carpets from Hollywood to Cannes, Li Bingbing is among the most recognized faces in China and counts over 20 million followers on Chinese social media networks among her many fans. She has starred in a number of high-profile English-language films, including the most recent installment of the hit ‘Resident Evil’ series and ‘The Forbidden Kingdom’ with Jackie Chan and Jet Li.

Rise in Illegal Killing of Elephants

In the past decade, the number of elephants illegally killed in Africa has doubled, while the ivory trade has tripled, according to a recent study by UNEP and partners, Elephants in the Dust.

Data from the Convention on International Trade in Endangered Species (CITES) monitoring programme ‘Monitoring the Illegal Killing of Elephants’ (MIKE), shows that 17,000 elephants were illegally killed in 2011. MIKE covers areas home to around 40 per cent of African elephants, meaning the true figures may well be even higher. Indications are that the number of elephants killed in 2012 ran into the tens of thousands.

In Cameroon, up to 450 elephants were killed early last year. Profits from poached ivory are believed by some experts to be supporting armed conflict in the region.

Demand for illegal ivory remains highest in the rapidly growing economies of Asia, particularly China. Large-scale seizures of ivory destined for Asia have doubled since 2009. Weak governance in source, transit and destination countries is also contributing to the problem.

“Rising wildlife crime in Kenya and other parts of Africa is an issue of global concern, impacting many regions of the world. Profits from the high price of elephant ivory and rhino horn are being linked to criminal networks involved in the illegal drugs trade, illegal logging, and human trafficking according to the UN Office on Drugs and Crime,” said UNEP Executive Director Achim Steiner.

“UNEP, CITES and partners are working together to improve collaboration between customs, police forces and national governments to tackle this black market.  But illegal wildlife trade can only be eradicated if the demand for products disappears. Li Bingbing’s work to highlight the multiple costs of illegal trade can reach millions of consumers, and encourage sustainable choices    that can support the survival of Africa’s elephants,” added Mr. Steiner.

UNEP recently signed an agreement with the city of Shanghai–home to 23 million people–to display a series of photographs in the underground rail network highlighting illegal wildlife trade. The images by seven leading international wildlife photographers will draw attention to the black market in elephant ivory, rhino horn, skins, fins and flowers, which is threatening the survival of many endangered species.

A film, Elephant in the Room, produced in partnership with CITES, will be displayed in Shanghai’s main city square. The film traces the origins of an ornament made from illegally-sourced ivory and ends with the tagline, ‘when we stop buying, they stop dying’.

In a joint effort by UNEP and the NGO Save the Elephants, Li Bingbing will travel to the Samburu National Reserve in northern Kenya this week, where she will meet with wildlife experts and visit sites where elephants have recently been killed by poachers.

“An excessive demand for ivory is at the root of the rise in the illegal killing of elephants, and attempts to save them will fail unless this is tackled,” said Iain Douglas-Hamilton, Founder and CEO of Save the Elephants.

“Appetite for ivory can be changed, as it was in the US, Europe and Japan. The reality of what is happening to elephants in Africa must be communicated–such as through the work of Li Bingbing and other celebrities–in ivory consumer countries. If it is not, the outlook for elephants looks very bleak,” he added.

“With the current trend of elephant poaching for ivory across its range, there is a risk of sending elephants to extinction,” said Patrick Omondi, Head of Species Conservation and Management at the Kenya Wildlife Service.

“Global citizens need to come together to fight this internationally organized wildlife crime. A clear strategy on demand reduction in consumer states will go along way in saving the African elephants,” he added.
Besides illegal killings, elephants are also threatened by the increasing loss of habitat in around 29 per cent of their range areas – primarily as a result of human population growth and agricultural expansion. According to the Elephants in the Dustreport, this figure could rise to 63 per cent by 2050, posing a major additional threat to the long-term survival of the species.

The World Wildlife Fund estimates the global illicit trade in wildlife to be worth at least US$19 billion per year, making it the fourth largest illegal trade in the world after narcotics, counterfeiting and human trafficking.

Reptiles, sharks, great apes, and certain timber species are among the flora and fauna most affected by illegal wildlife trade.

A recent UNEP study showed that almost 3,000 live great apes are being taken from the forests of Africa and Southeast Asia each year. The main markets for the illegal trade in chimpanzees, gorillas and organutans include the tourist entertainment industry, disreputable zoos, and individuals who wish to buy great apes as exotic pets.

Research by UNEP and INTERPOL estimates that between 50 to 90 per cent of logging in key tropical countries of the Amazon basin, Central Africa and South East Asia is being carried out by organized crime. This is threatening attempts to reduce deforestation as well as efforts to combat climate change under initiatives such as Reducing Emissions from Deforestation and Forest Degradation (REDD or REDD+).

Despite ongoing challenges, positive steps are being taken to tackle environmental crime and ensure sustainable trade.

During the recent Conference of the Parties to CITES held in March 2013, some 170 government backed moves to afford increased protection status to hundreds of timber species, certain tortoises and turtles, and other plant and animal species. Five shark species and manta rays were also brought under CITES controls.

Other actions include the establishment of Project Leaf (Law Enforcement Assistance for Forests) – a recent consortium of forests and climate initiatives that aims to combat illegal logging and organized forest crime. The project is led by the INTERPOL Environmental Crime Programme and the UNEP’s collaborative centre in Norway (GRID-Arendal), with support from the Government of Norway.