Has India tossed out the Kama Sutra and come up with another way of screwing the world?

The country is getting in the way of international efforts to protect the climate by phasing out HFCs.

HFCs have become popular coolants since CFCs were phased out under the Montreal Protocol, a 1987 treaty to protect the ozone layer. Today, more than 100 million air conditioners use HFCs in the U.S. alone, and lots of fridges too. The switch from CFCs to HFCs helped save the ozone layer, but it turns out that HFCs are terrible for the climate. And as the ozone heals but the weather goes bonkers, world leaders from U.S. President Barack Obama to Chinese President Xi Jinping have been pledging to work together to stamp out the use of HFCs.

India’s leaders have publicly voiced support for efforts to ban the use of HFCs by amending the Montreal Protocol. But when it came to crunch time during meetings in Bangkok this week, the nation’s negotiators prevented formal discussion of making any such changes.

It’s extremely likely that humans have been the dominant cause of global warming since the 1950s, according to a landmark report from the world’s top panel of climate scientists. And we’re failing in our efforts to keep atmospheric warming below 2 degrees Celsius, or 3.6 Fahrenheit, which many scientists say is needed to avoid massive disruption.

The Intergovernmental Panel on Climate Change conducted an epic review of climate research over the last three years. It is summarizing the most important findings in its fifth assessment report, which offers the clearest picture science has ever painted of how humans are reshaping the climate and the planet.

Here, in a nutshell, are the main findings of a summary [PDF] of part one of the assessment report, which focuses on the science of climate change:

Human influence has been detected in warming of the atmosphere and the ocean, in changes in the global water cycle, in reductions in snow and ice, in global mean sea level rise, and in changes in some climate extremes. …

Warming of the climate system is unequivocal, and since the 1950s, many of the observed changes are unprecedented over decades to millennia.

The IPCC also concludes that oceans have absorbed more of Earth’s excess heat since the 1990s than was the case during prior periods, explaining what climate deniers wrongly describe as a warming slowdown. And the panel revised downward the lower limit of warming that’s expected once we double the atmosphere’s CO2 concentrations, but left the upper limit unchanged from its 2007 assessment.

For background on the IPCC and this assessment report, be sure to check out this explainer.

And to save you the trouble of reading the dense 36-page summary released on Friday, we’ve rounded up highlights here — key numbers, facts, and graphs:

You’re going to be hearing a lot about the Intergovernmental Panel on Climate Change during the next couple of weeks. And then again in spurts during the coming year. The IPCC is the world’s foremost authority on — you guessed it — climate change. It’s the top cat, the big cheese, the heavyweight champion of the world community of climate experts.

It’s a scientific group set up in 1988 by two divisions of the United Nations. The goal was to form a body that would provide policymakers with trusted, cutting-edge information about climate change.

Thousands of climate scientists from around the world volunteer their time to analyze and summarize the latest and best science. The result: Big, fat reports.

And now the IPCC is dropping its first big report in six years — a scientific inventory of the combined knowledge of all the brightest minds in climate science. Needless to say, climate skeptics are not too pleased at such a robust body of science coalescing before the world’s eyes. 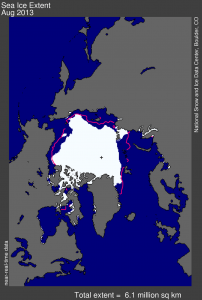 First the good news: Arctic ice melt has not been as extreme this summer as during last year’s historic collapse.

The bad news is that the melt has been more extreme this summer than the 20-year average — no surprises there, given the icy clime’s rapid decline.

The Arctic’s August 2013 ice coverage is shown in the image on the right. The black cross shows the North Pole and the magenta outline shows the average ice cover at the same time of year from 1981 to 2010.

The world’s glaciers are wasting away at a cracking pace — but it’s not just because the climate is warming.

Soot and other black carbon is settling on ice and snow, absorbing the sun’s rays and causing frozen water molecules to melt. It can be hard to tell how much of the melt to attribute to warming and how much to soot.

But researchers have pinpointed a period shortly after the Industrial Revolution when black carbon alone appears to have caused glaciers to melt in the European Alps.

Pests are packing their metaphorical bags and heading for fresh starts nearer the North Pole as the climate warms around them.

Beetles, moths, fungi, and other pests that afflict forests and crops in the Northern Hemisphere are expanding their ranges northward by an average of 24 feet every day.

That’s according to British scientists who studied the records of infestations of 470 pests around the world since 1960 and measured the rate at which their ranges appeared to be shifting. They say their findings reveal a potential threat to food security posed by global warming.

A fleecy clump of moss growing on the Antarctic Peninsula might not seem like much of a sight to behold, but it’s a sign of a climate in flux.

The patch of Polytrichum moss, sampled in 2008 by scientists at Alexander Island’s Lazarev Bay, either did not exist or was slumbering beneath ice when the peninsula was first spotted by Russian sailors in 1820.

But now it is flourishing on ice-free rock — the world’s southernmost such moss bank.