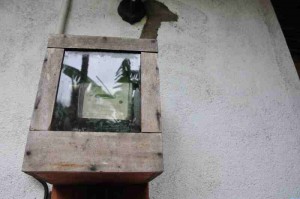 In a previous post I had described the features of AR Shivakumar’s self-sufficient home in Bangalore built 19 years ago when water shortages were unheard of in the green city. Shivakumar’s house has a green element in every nook and corner, including plants in the balcony and coconut shells converted to garden pots. What surprised me, however, was his terrace.  It does not have even a hint of green and is painted a stark white.

In a previous post I had described the features of AR Shivakumar self-sufficient home in Bangalore built 19 years ago when water shortages were unheard of in the green city. Shivakumar’s house has a green element in every nook and corner, including plants in the balcony and coconut shells converted to garden pots. What surprised me, however, was his terrace.  It does not have even a hint of green and is painted a stark white.

Buildings account for a large proportion of the emission of greenhouse gases worldwide, mainly because of the energy needed to heat or cool them. Large office buildings and residential apartments which host thousands of people can be particularly wasteful in terms of energy, water and paper use.

Several businesses in Pakistan have taken steps over the last few years to slash the use of resources at their office building under the World Wide Fund for Nature (WWF) Pakistan’s Green Office programme. Apart from helping companies save money, it improves their public perception.

Since signing up in January 2011, the Engro office in Karachi has cut electricity and paper use by 25 to 30 per cent, and waste generation by almost 45 per cent. Wajid Hussain, the green office coordinator for Engro subsidiaries, said they had saved Rs4 million on electricity bills in 2011.

Not that it was easy to get office workers to alter their habits. “When you have 60 printers in the office and you replace them with two, some people can get quite uncomfortable,” said Hussain.

Initially, the WWF-Pakistan set them a target of reducing consumption of electricity and paper and generation of waste by 10 per cent. But they raised the savings by taking a number of small steps over the last two years, said Hussain.

“We filmed the windows with UV protection which helped bring the temperature down by five degrees. The air conditioners are always fixed at 24 degrees Celsius. The electrical circuits were segregated, reducing the number of lights switched on using one switch to three from 50 before. Conventional 60-watt bulbs were replaced with 2-watt LEDs. People seated next to windows were told not to switch on the lights during the day. The switches were colour coded: green for during the day, yellow when it was cloudy outside and red for bright light.”

Mustafa, the green office coordinator at Packages, said since being certified in 2010, the company’s head office in Lahore has reduced the amount of organic waste it generates by 50 per cent, shifted a large proportion of its electricity use to solar panels, and computerised all documentation in order to minimise paper use. The company has an in-house recycling unit and a baking unit in the cafeteria to reduce waste. By next year, it is also planning on acquiring absorption coolers to cool its office building, which will help bring energy use down further.

Qarshi Industries hasn’t just reduced resource use at its head office in Lahore, cutting paper use by 46 per cent in just one quarter, but is also cutting water consumption at its processing plants.

Mudassar Maqbool, the green office coordinator for Qarshi, said that 82 per cent of the waste water was recycled to irrigate its medicinal herb gardens in Haripur. This included water discharged by 50 air conditioning units. Rainwater collected in channels is also used for irrigation and supplied to a neighbouring housing scheme for use on green belts. Sprinklers have been installed in the gardens to time the watering for the morning or evening, when there is less sunlight and thus slower evaporation. He said water consumption at the plant had been reduced by 17 per cent.

Nazifa Butt of the Green Office programme at WWF-Pakistan said that eight companies had been certified under the programme while six more were in the process of being certified. To get certified, companies need to achieve 10 per cent cuts in energy and paper use and waste generation.

Butt said that auditing the use of energy in transport needed to get those thousands of workers to their offices, to clients and to their partners was not part of the programme. She said that the best way to save energy on transport was to introduce car pooling. She said few companies did this.

The certified companies include five Engro subsidiaries, Qarshi, Packages and Unilever. Mobilink, Haleeb, Irfan n Irfan, Tetra Pak, Engro Chemicals and IBA Sukkur are in the process of being certified by WWF-Pakistan.