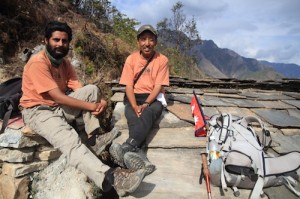 Apa Sherpa’s battle and struggles in the Himalayas- to raise awareness about Climate Change in the mountain communities and the successful completion of the historic Great Himalaya Trai-Climate Smart Celebrity Trek (15 Jan-22 April 2012).

I spent more than three months traversing Nepal’s harsh mountainous regions, taking stock of the life of vulnerable people and assessing the impacts of climate change. Along with Apa Sherpa, the 21st-time Everest summitter, I completed a grueling 1,555 kilometers trek which took me to some of the highest Himalayan passes and acquainted him with diverse cultures, lifestyles and people.

After return to Kathmandu on April 20, 2012 I had shared my experiences through local media. Moreover, I am producing short films on changing livelihoods that I shot during the trek. I haven’t left my mission of storytelling of people particularly in Nepal’s northern territories. I am continued my work through www.storycycle.com as an online editor.

Now I am more into exploring the Information and Service delivery System in Local level, that effect people daily life and adaptation approach in environment changes. I also want to explore the socioeconomic changes and identification of adaptation/coping mechanisms of the mountain people hear in Nepal.

To do that I am focusing on three things 1, Connectivity 2, Content Creation and promotion of those content.

The rural places are not yet to be connected with any media presence like there are not mobile network or any Internet footprint. I have identified 62 different locations along these 1555 KM where there is no connectivity.

Now  we are organizing “Travel Story Camp” in community people to create local content . Where we focus on digital story telling,  train the participants on storytelling skills.

Apa Sherpa’s Battle in the Himalayas

DEC 14 – It was in Doha that the 18th session of the Conference of Parties (COP 18)—the United Nations Framework Convention on climate change—took place this year. Walking into the Qatar National Conference Centre as part of the youth delegates on that very first day, we had felt buoyed by the kind of diversity we saw there—participants from all around the world, eager to get on with the matter at hand, eager to play a part in what was an event of farreaching magnitude.
As the days wore on, however, frustration was rife, particularly among the youth. We felt like we were being subtly dismissed in the discussions by the older delegates, perhaps deemed too hasty and emotional in our judgements—there was a definite sense of being overlooked. In our defense, as ill-equipped as we might have seemed, our ‘haste’ is ultimately a reflection of the kind of exasperation we’ve begun to experience when it comes to the bureaucratic nonsense that holds up progress every time we feel like we’ve made a breakthrough. All we could wish for, at that point in time, was for the parties to come to an agreement, however flimsy.
As the host country, Qatar’s ecological concerns naturally figured prominently at the conference, particularly to do with its water supply; Qatar’s water usage per capita is among the highest in the world. The country is planning to build five ‘mega’ reservoirs—some of the world’s largest water tanks—on the outskirts of Doha by 2016, according to reports, and the project will cost up to US $2 billion.
Nepal, in the mean time, was trying to push the mountain agenda at the conference, something the government has been striving to do since
COP 15 in Copenhagen. How effective it has been in this regard is a matter of interpretation; we’ve been able to organise side events around the COP, but do not have any real technical influence in the UNFCCC negotiation process. Young climate activist Avishek Shrestha stressed on the need to incorporate the mountain agenda into a more prominent position at COP lest it be sidelined forever.
It was, however, encouraging to see the Nepali government working so earnestly with mountain countries for the mountain initiative, and proposing an action plan encompassing the same. There was hope among delegates that this raising of voice could translate into funding for the initiative. Nepal also took over from Gambia as the chair of the UNFCC Least Developed Countries (LDC) group—comprising 48 nations—for the year 2013-14. Prakash Mathema, joint secretary at the Ministry of Environment, Science and Technology, will be heading the group; his chairmanship will be effective from January 2013.
We learned over the time we spent at the conference that Doha’s youth is extremely aware in terms of climate change issues, but like in the case of many other countries, still has a long way to go when it comes to actual, practical understanding and application of knowledge. And although stakeholders here seem keen to cut down on their carbon footprint, debates become heated every time the subject of the oil and gas industry comes up. Qatari industrialists are generally firm on the fact that their entire economy relies on oil—cheaper there than water, by the way—and pulling back the sector would mean certain financial suicide.
On the personal front, I was also able, on the occasion, to share my own experience of walking the Great Himalaya Trail—1,555 kilometres in 99 days—during which I had assessed the impacts of climate change and environmental degradation on communities in high-altitude regions. My story appeared to inspire quite a few Qatari youth, who told me that they wanted to visit Nepal and walk the trail themselves.
Nepal’s participation in the COPs has definitely been significant in putting our environmental agendas on an international platform, and deriving important qualitative perspective. But we are still far from being influential in negotiations, something that will hopefully change in the coming years.