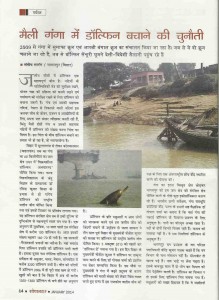 For about two decades, few outsiders could see this paradise, as insurgency and anti-insurgency rendered Kashmir a global trouble spot. But now that the violence is on the wane and there is talk of ‘paradise regained’, haphazard hotel construction and unattended rubbish threaten to spoil this heavenly abode. The idyll of Kashmir is ill-prepared for an influx of tourists and the features that attract visitors could well prove its undoing.

Regulations to manage sewage, rubbish or solid waste were totally ignored during the atmosphere of violence that reigned for around 15 years. But even after Kashmiris witnessed almost a decade of governable era since 2003, those who have been at the helm all these years could hardly do anything for Kashmir’s treasure trove – its environment and ecology.

Recent improvements in the security situation have led to a surge in tourism. Around three million tourists visited Kashmir in the last two summers, according to official figures. With half a million people directly or indirectly involved in the valley’s tourism industry, this is now easily shaping up into a major contributor to the local economy. Thus the swelling up of tourist numbers is certainly a cause for joy, but has also led to a boom in hotel construction, especially in the famed resorts of Pahalgam, Gulmarg and Sonamarg.

There is least of desirable planning in the construction procedure. Most hotels try to maximise the number of rooms even if they block the best views of the Himalayan peaks in the process or, woefully, sit on the banks of erstwhile pristine waters of Lidder and Sindh. The three major resorts are fast becoming concrete jungles.

With tourists from all over India and the world moving into Kashmir in droves, rubbish now threatens not just the ecology but the tourism industry itself. Environmentalists have expressed their concern about the policy paralysis saying the construction should be prohibited within these resorts. But the government has not only allowed construction of hotels right on the most scenic spots, but has also failed to provide adequate disposal systems for solid and liquid waste.

According to the official records in Pollution Control Board (PCB), only two out of over 100 hotels in Gulmarg and only three out of over 150 hotels in Pahalgam have secured No Objection Certificates from PCB; the rest are functioning without the standard norms. The only waste disposal site in Pahalgam has been set up right at the bank of a stream which flows into Lidder River, an important tributary of Jhelum.

In Gulmarg, garbage is thrown under the forest trees, which has caused huge damage to them. The high-altitude meadow that turns into a golf course every summer and a ski-slope every winter has no waste-treatment facilities either. Thousands of tourists throng to the meadow throughout the year, especially in summer. The growing number of tourists visiting the heath resort, especially those high-end tourists who come for playing golf at world’s highest green golf course, means more greed for those who remain in hunt of high business. An influential businessman has recently built a huge hotel here, having chopped down hundreds of trees to make way for the project.

THE SORDID SAGA OF SONAMARG

The directorate of Ecology, Environment and Remote Sensing has recently issued notices (which this writer exclusively gained access to) to Sonamarg Development Authority calling for immediate measures to undo the environmental damage caused by unplanned construction at the famous Sonamarg resort, but nothing has changed except the scenic beauty of that charming resort often called “the golden meadow.”

“While development of modern infrastructure is of paramount importance for meeting the needs of the tourism industry, it is important to design such development in an eco-friendly fashion to preserve and conserve the fragile ecology and environment of Sonamarg,” warned one of the notices.

“The development which has already taken place at Sonamarg or is in progress has a serious adverse impact on the ecology and environment.” The waste generated by hundreds of thousands of tourists is thrown around without any treatment or scientific management, as per the survey of the department officials.

And all untreated effluents find their way into the Indus River which straddles the beautiful resort. “This causes extensive pollution in the river because no Sewage Treatment Plant (STP) is in place,” the officials have observed.

In terms of popularity, Sonamarg is a relatively recent addition to Kashmir’s tourist map. Areas outside the town remain idyllic. But many people worry the area will soon suffer a similar fate to the better-known tourist resorts of Pahalgam and Gulmarg, where unconstrained tourism has caused havoc.

Though a few conscientious citizens have started raising their voices against the environmental mess, yet things look far from getting better. A few years back a local NGO in Pahalgam, Pahalgam Peoples Welfare (PPF) filed a public interest lawsuit in the High Court against illegal construction in Pahalgam. As a result, the court served several notices to the government and its official limb, Pahalgam Development Authority.

“We said in the petition that building permission laws have been thoroughly violated,” said Reyaz Ahmed, member secretary of Pahalgam Peoples Welfare.

A local teacher, who did not want to be identified, said the bureaucrats and influential businessmen have converted the green zone in Pahalgam into an area permissible for construction in the master plan of the tourist resort after purchasing chunks of land in Pahalgam.

THE CURIOUS CASE OF A CONSULTANT

A consultant from outside Kashmir, who was part of a team from a Consultancy Agency which is helping Jammu & Kashmir government to form an action plan on climate change, recently refused to accept the accommodation at a houseboat in Dal Lake when he learnt that the liquid waste from houseboats in Dal Lake was going into the lake without any treatment.

“He asked us to change his accommodation without any delay saying his conscience won’t allow him to stay there,” confided an official of the Ecology, Environment and Remote Sensing department.

Two years back, revelations by Wikileaks included a cable in which an American diplomat had used a striking simile about Dal Lake’s pollution and Kashmiri politics saying Kashmiri politics was “as filthy as Dal Lake”.

“Instead of devising a solution for preserving the great heritage of Kashmir’s houseboats, the government is hell-bent on forcing the closure of houseboats,” Tuman said.

“It is not only the matter of securing the livelihoods of thousands of families, but a question of protecting our heritage as well.”

Houseboats were first built by British rulers in the 19th century on the pristine waters of Dal Lake to allow their officials in India to take a break from the scorching heat of Indian plains in summer months.

Since then, the houseboats have been the most preferred accommodation sought by the tourists who come to Kashmir. So Tuman has reasons to worry. “We don’t want them to die because of the government’s failure to provide a solution,” he said.

Houseboats alone are not responsible for the environmental devastation caused to Dal and other major water bodies in the city. The 372 hotels registered with Kashmir’s tourism department in Srinagar city, have no sewage treatment facilities either. Having 10785 rooms with 21073 beds, these hotels remain chock-a-block with tourists especially during summer and drain their sewage directly into Jhelum, Dal Lake and Nagin Lake.

For the past three years, Srinagar has been facing a serious space crunch to accommodate the tourists in summer. According to official figures, more than 3.5 million tourists have travelled to Kashmir during the past two and a half years. This has forced the tourism department to allow residents of a number of areas to convert their houses into guest houses in Srinagar where most tourists prefer to stay. This would mean the disposal of additional untreated sewage into our water bodies.

Kashmir is struggling to develop a more sustainable form of tourism after the booming industry has turned the region’s lakes and rivers into sewers. Athar Parvaiz looks at a possible solution…