The changing rain pattern is having disastrous effects on numerous species of indigenous birds, with many of them being unable to breed due to this year’s delayed monsoon rains. http://www.thenews.com.pk/Todays-News-4-129652-Habitat-breeding-patterns-of-birds-being-affected-by-climate-change

The impact on climate change on agriculture in India can be serious – Jalavayu sankat ke badal.

Baltoro glacier has grown since 1947

Pakistan has some of the world’s longest glaciers such as the massive glaciers of Baltoro and Biafo… Today scientists are saying that while glaciers around the world, including the Alps, have started losing mass in recent years due to warmer temperatures caused by climate change, glaciers in parts of Pakistan’s Karakoram range like the Baltoro have been putting on mass.

[Here’s a blog post on the the SACCA media workshop posted on Indigenus, Nature India’s blog, on 26 August 2012. The full blog can be accessed here.]

Climate change seems to be our favourite punch bag, whatever the calamity — droughts, failed monsoons, floods or cyclones. How much science goes into deciding which of these natural phenomena are an offshoot of the global climate change phenomenon? Is climate change reporting as robust (or weak?) as the scientific evidence to back accentuated glacial melts or sea level rise? 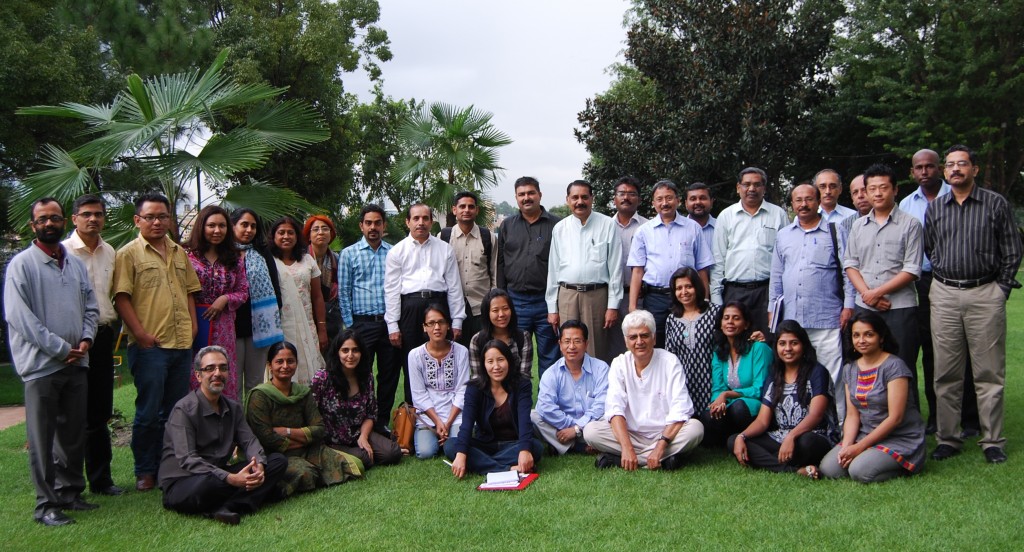 A regional meet of climate change communicators from the SAARC nations currently underway in Kathmandu, Nepal (August 24-30, 2012) is seeking to look at all that is good with our reportage and all that we need to improve. It would look and feel like any of the umpteen such well meaning ‘workshops’ which fail to make much headway but for the presence of some real ‘experts’ who have toiled it out on the ground. From Nepalese journalists who have trekked the Hindukush range to Sri Lankan scribes who have shrugged off the ‘small island nation’ tag to influence policy across south Asia; spirited Editors of newspapers, magazines and television channels from SAARC countries to radio reporters whose voices reach the farthest corners of our villages — the mix at the meet organised by PANOS is eclectic and therefore works.

India’s best known climate change strategy – the National Action Plan on Climate Change (NAPCC) – has come in for sharp criticism by leading domain experts who say it not just lacks vision but also allows glaring lack of cohesion between the eight grand mitigation missions launched by the government five years back. The ‘course correction’ review conducted by Sujatha Byravan of Chennai-based Institute for Financial Management and Research (IFMR) and Sudhir Chella Rajan of Indian Institute of Technology (IIT) Madras collated views of 44 experts from across the country to conclude that the pressure and challenges that India faced in developing the national climate policy have resulted in ‘certain tensions’ running through these lofty missions.

“Most of the mission documents read like a wish-list from which little has been left out,” they point out. This might please everyone, but hardly makes for national strategy. As a result the mission document is nothing more than “the usual planning document with a few points on climate thrown in.”

NAPCC is the national framework laid out by the Prime Minister’s Council for Climate Change in 2008 as the guiding national strategy to address India’s development concerns and challenges.

Are the priorities right?

Though it might be too early to evaluate these missions, Byravan and Chella Rajan say the water, green India and agriculture missions fail to prioritise the issues that India needs to tackle on a long term basis. “The solar and energy efficiency missions, on the other hand, are sharp, clear and relatively focused.”

A climate mission can’t solve all the problems of water and emissions that the country has been facing for a long time, the reviewers feel, making a case for smaller and focussed missions such as a “mission to improve efficiency of urban water use, or a missions to replicate some successful models of sustainable agricultural practices in a particular agro-climatic zone, or a mission to expand non-motorised transport in 5 pilot cities.”

According to the reviewers, there’s also a clash between India’s aspirations in framing the climate change policies — are they designed to fulfil international or national ambitions or both? They cite the example of the solar mission which looks like something India wants to “make a mark internationally” with and “demonstrate its commitment to addressing climate change.” The answer to this, however, varies from mission to mission.

No clarity on emissions

The policy is not clear on emission reduction targets and as such there is no mention of the level of mitigation expected in describing climate action plans in these missions. “Since the missions are expected to describe development strategies with climate as a co-benefit, it would have been helpful to clearly identify activities for which a climate benefit is accrued”, the duo write in their 32-page report.

One of the main criticisms of India’s climate policy is that there is no specified goal or target for sustainable development projects. For instance, the solar mission fails to focus on off-grid solar power, which could be a boon for remote areas. Similarly, there’s little emphasis on low-chemical practices in the sustainable agriculture mission – a practice that would not just boost sustainability of crops but also help reduce greenhouse gases. Some deeply-embedded challenges such as removing environmentally destructive subsidies for chemical fertilisers have not been taken seriously at all.

“The development targets of the eight missions are not prioritised with clear sustainable development-focussed approaches and outcomes, if these are indeed the focus of the NAPCC,” the reviewers point out. Most experts interviewed by them also felt that integration among these missions was missing. A persistent question asked by many was, “Where will all the land come from for expanding agriculture, (making a) green India and (for the) habitat (mission)?”

Byravan says that the missions were placed in eight “separate bins” and so India is looking for solutions to its climate change problems through “sector-specific lenses”. There’s little synergy between the missions and hardly any effort to work together. “The multiple dimensions of climate change, however, make it vital that we adopt an approach that is interdisciplinary, breaks traditional ministerial boundaries, and creates conditions for flexible institutional responses based on continuous learning,” she told Nature India.

Pointing out that some other countries actually address climate policies through independent councils and not ministries like India does, they say that unless India breaks traditional ministerial boundaries to approach climate change as an interdisciplinary issue, “our goals and aspirations for ‘climate-proof’ development will not be attained.”

In India climate change is still perceived as a marginal concern and its centrality to economic development and poverty alleviation is not appreciated, Chella Rajan toldNature India. “The emergence of a framework of climate policy in the country provides us with an opportunity to communicate the significance of global warming in the development context,” he said.

In a span of four working seasons, around 1,000 workers, including 123 soldiers were deployed to reduce the water level of the Lake which was posing a catastrophe in the making

The last spade of debris was cleared and the last blocks of boulders were removed. As the men dusted their worn-down boots and packed their bags to go their own separate ways, they all had one common feeling- they were leaving behind a tamed lake that once challenged to take thousands of lives and cause colossal destruction downstream.

The Job was done. Some 4500meters above sea level the 1,000 Bhutanese workers successfully reduced the water level of the most dangerous glacial lake in Bhutan by 5 meters, the end to a set target five-year project.

Downstream, Punakha valley breathed a sigh of relief. The valley had already seen a Glacial Lake Outburst Flood (GLOF) in 1994 which claimed 20 lives and caused irreparable damages to infrastructure and livestock.

The destruction of the GLOF this time, if untamed, would have been three times more.

The Project Manager of the lake mitigation project, Dowchu Drukpa, said it has been a hard five year period with every year bringing new challenges and difficulties.

He said the achievement of the project is expected to reduce the extent of damage downstream in the event of an unforeseen glacial lake outburst.

“Despite the unpredictable weather conditions and challenges of working in a remote high altitude and inhospitable work environment, we have managed to reduce the water level of the lake by the set target over a period of 4 working seasons,” said Dowchu Drukpa.

“The volume of water released in the span of four working seasons is equal to the 1994 outburst and this means we have released a lot,” said Dowchu Drukpa.

It took about 300 workers each working season to successfully lower the water level of the lake. Each year the workers had 2-3 months of manual working season. Workers had to work from 8 am to 4 pm everyday.

“Every year we had different workers but there were some who worked for two seasons also,” said Dowchu Drukpa.

The project to artificially reduce the water level of Thorthormi Lake began in 2008.

The initial year of the project started with technical assessment of the site and only by the second year some 300 workers were recruited.

During the first year of the working season in 2009, workers were able to reduce the water level by 87 centimeters while in the following years water levels were lowered by 1.3 meters and 1.45 meters respectively.

“The initial working season was tough because as it was the start of the project and there were many things to be done,” Dowchu Drukpa said.

With a total of 3.68 meters achieved by the third year, 1.32 meters were left for the workers to complete the whole project.

This year, with support from the Royal Bhutan Army (RBA), around 123 soldiers helped reduce the water level and achieve the target of 5 meters although half the numbers of regular workers were in attendance.

The job is done but it didn’t come without a cost.

In 2010, three men died in a span of four months due to altitude sickness and many more were hospitalized because of the working conditions.

The deaths raised a lot of questions on the safety of the workers. Subsequentlty the project management initiated various programs of which one was to set up transit medical camps at two different locations.

“After the incident, lessons were learned and we did everything possible to make it safer for the workers,” Dowchu Drukpa said. He said a through medical check-up was carried out for all the workers before sending them up north. At the base camp they were further checked and were allowed to work only if found fit.

Dowchu Drukpa said even though the work is complete regular monitoring of the lake will continue as the debris may start to recollect and water levels may rise again.

A series of studies conducted by the Department of Geology and Mines, Ministry of Economic Affairs, in collaboration with international research institutes in the late 1990’s and early 2000, revealed that Thorthormi lake is among the most dangerous glacial lakes in the country.

The studies thus recommended for construction of a spillway channel to reduce GLOF threats for the lake. It was then that the artificial lowering of the lake was prioritized under the National Adaptation Program of Action (NAPA) with funding for the Least Developed Countries Fund/ Global Environment Facility and co-financing by the United Nations Development Program, Austrian Development Cooperation, World Wildlife Fund Bhutan and the Royal Government of Bhutan.

Thorthormi Lake is located in the headwater of Pho Chhu sub-basin at an altitude of around 4,428 meters above sea level in the remote Lunana area of northern Bhutan. The lake poses the most pertinent GLOF threat and in the event of an outburst has a potential to cause unprecedented damage to the valleys of Pho Chhu and Punatsang Chhu