Surrounded by two giant economies—China and India—and with a massive presence of development agencies representing developed nations, Nepal is under pressure to find a way to diplomatically tackle intense global climate politics, and raise its voice effectively at the global platform. Nepal’s dependence on donor countries for developmental works, and the necessity to maintain neutral relations with neighbors on various political, cultural and economic issues call for caution and tact in dealing with climate change issues. Recently selected as the chair of least developed countries (LDCs), the pressure to act effectively and responsibility is mounting for the country, as expectations from member countries grow.

Developed countries are demanding that along with them, rapidly growing economies like China and India be legally bound to reduce emissions of green house gases (GHGs) like carbon dioxide. However, countries like China and India are of the view that developed countries have already reaped enormous benefits even as they have polluted the world. Hence they should be proactive on climate change and take the lead by binding themselves legally to cut GHG emissions, rather than ask the developing nations to make the sacrifice. This is the crux of global negotiations. But many other issues embedded in climate politics have made it complex. Until and unless these issues are resolved, there is little chance that the countries will arrive at a solution that can be implemented globally through legally binding provisions. These issues have been debated for the last two decades. 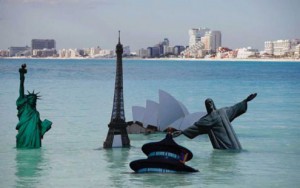 In the developed world, big businesses have a hold over oil market. They invest huge amounts to convince people that climate change is propaganda and that there is no need to worry. Many politicians in the US, especially the Republicans, believe that there is no such thing as climate change, leave alone express their readiness to fight it. Climate change deniers are scattered all over the developed world, and are as active as climate activists in developing and least developed countries. There are still arguments at the global level on the reliability of facts and figures presented by the scientific community on climate change, but most scientists agree that the reality of climate change can no longer be denied, with its effects visible all around.

Along with arguments over whether or not climate change is real, there is another fear that threatens climate negotiations. The developing world fears that the developed world is trying to decelerate the pace of their development by placing a millstone around their necks in the name of carbon emission reduction. Though it is not expressed in negotiations, the developed world, it is feared, doesn’t want the developing countries to grow unconditionally, as the carbon emission reduction provision in the Kyoto Protocol (an agreement between the countries under United Nations) places legally binding obligations on them. They want this provision to be extended to the developing countries as well.

Caught in this clash of egos and world powers are poor and vulnerable countries like Nepal that have been trying to convince both the parties of the urgent need to deal with these issues and come up with a workable solution. Poor and least developed countries cannot do much to solve the problem, as it is beyond their control. They have no option but to convince the developed world to support them in fighting climate change and to urge the developed world to take immediate steps to reduce GHGs like carbon dioxide from the atmosphere.

The negotiations are getting tougher by the day due to growing pressures interest from various vested groups. Developed and developing countries have been sending veteran diplomats to climate change negotiations to make sure that each gets the favorable end of the deal. The missions attending the global negotiations are growing, and the tension during the talks indicates the countries are taking the issue seriously.
Poor countries have no option but to try to convince the developed world to help them fight climate change.
Amidst this complexity, Nepal has become the leader of 49 LDCs. In the next two years, it needs to be at its diplomatic best to deal with other members of LDC group as well as the rest of the world. As a nation, it can compromise on many issues, but as a leader, it must satisfy the other 48 LDCs, and make sure their voices are heard clearly in global debates, a tricky and risky prospect. With its selection as LDC chair on climate change, Nepal needs to urgently mobilize its diplomatic community to establish its leadership in climate change negotiations and send a message to the global community that despite political instability at home, Nepal is capable of effectively fulfilling this global responsibility.

The country’s diplomatic community, for which environmental agenda like climate change is a matter of low priority, should now be retrained and made proactive to establish the country as a leader in climate change. The Ministry of Science, Technology and Environment should try to convince diplomatic missions that climate change is not just an environmental agenda, but a great opportunity to establish effective diplomatic leadership in the global arena. Climate change, as such, should not be taken just as a responsibility of the Environment or Forest Ministry, or seen only in terms of the projects that will enter the country in coming years. Definitely, the Environment Ministry is the focal agency in dealing with climate change, but it is the government of Nepal as a whole that has become the chair of LDCs group; the nation should act collectively to prove to the global community that Nepal is a good leader. According to a Chinese proverb, “If the lips are gone, the teeth will grow cold.” In other words, if two parties share a common interest and one is hurt, the other will be too. It will be Nepal’s challenge to convince the global community of this fact.

Published in the Republica English daily…..