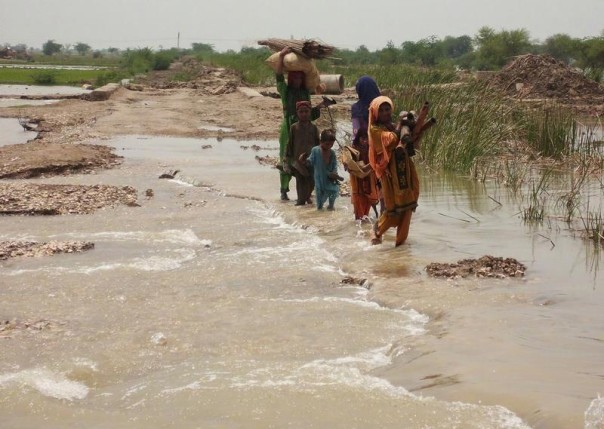 A family carries their belongings as they wade through floodwaters in Dera Allah Yar, in the Jaffarabad district of Pakistan’s Balochistan province, Aug. 6, 2013. REUTERS/Amir Hussain

SIALKOT, Pakistan (Thomson Reuters Foundation) – Saleema Bibi died at the age of just 29 when the roof of her house in Talwandi village in northeast Pakistan’s Sialkot district collapsed under heavy monsoon rains. Her husband and three children were badly injured.

“The roof of our house, where we all were sitting on a cot-bed, caved in after failing to withstand torrential rain that lasted for five hours,” sobbed Bibi’s husband, Muzzamil Raza, describing the tragedy that hit his family on Aug. 14.

As the monsoon brings seasonal downpours and floods across Pakistan, Sialkot – 192 km (122 miles) from Islamabad – is the worst-hit district in Punjab province, in terms of fatalities and property damage.

An estimated 200 villages in Sialkot are waist-deep in floodwater, which has damaged homes and public infrastructure, as well as rice, cotton and vegetable crops on thousands of acres, according to local disaster officials.

Emerging from Himachal Pradesh state in northern India, the ChenabRiver enters Pakistan after passing through Indian-administered Kashmir. It flows through Punjab province’s northeastern districts and joins the Indus River in Multan district in southeast Punjab.

According to Asjad Imtiaz Ali, chairman of the Federal Flood Commission, the Chenab has experienced its first flood in 30 years, following exceptional rains in its catchment area.

“The river broke its banks at different places as the water level rose, particularly after India released (on Aug. 14) surplus floodwater into the river in its territory, to the sheer surprise of the Pakistani authorities concerned and without prior intimation as required under the Indus Waters Treaty agreement,” Imtiaz Ali told Thomson Reuters Foundation.

Pakistan has suffered economic damages of more than $16 billion as a result of consecutive monsoon floods each year since 2010. Some 4,000 people were killed, thousands injured and millions displaced from their homes, according to the Economic Survey of Pakistan 2011-12.

This year, again, the swelling floods in the Indus River and its tributaries in Pakistan – the Chenab, Jhelum, Ravi, Beas and Sutlej – are leaving behind a trail of devastation.

As of Aug. 21, 118 people had been killed, 812 injured and over 399,000 affected in different parts of the country. An estimated 1,700 villages have been hit by flash floods, with many of them vanishing completely, according to the latest loss and damage report from the National Disaster Management Authority (NDMA).

Around 11,200 houses have been damaged fully or partially, and summer crops – rice, cotton, sugarcane, maize, peanut, millets, sunflower and vegetables – on over 325,000 acres of land have been devastated by heavy rains and flash floods.

Iftihar Ahmed, chairman of the Pakistan Agriculture Research Council, noted that prices of vegetables used in daily cooking have jumped 300 percent, raising “a serious threat of food insecurity” if damaged road and rail networks are not repaired urgently and financial support is not provided for farmers to re-sow their crops.

All rivers, including the Indus, are now flowing at full capacity, while the country’s two largest reservoirs, Mangla and Tarbela, in northern Pakistan are close to their maximum volume for the first time in many years.

People living near the reservoirs fear their homes will be washed away, as government authorities have asked them vacate the areas, amid the latest forecast for another spell of torrential rain during the last week of August in southern Punjab, eastern Balochistan and southern Sindh provinces.

The Punjab Disaster Management Authority said Mangla Dam and the Jehlum River had already overflowed on Aug. 15, flooding at least 500 houses in 12 residential areas of Kallar Syedan, a town in Rawalpindi district, a few kilometres east of Islamabad.

Nawaz Suleman, a resident of Dhoke Mistrian, one of the flooded suburbs, said the area looks like a collection of islands but local officials have not responded to pleas for families to be relocated to a safer place.

Flood Commission Chairman Imtiaz Ali said the coming bout of rainfall – due in the last week of August and first week of September and predicted to be the most intense so far of the ongoing monsoon – is likely to be catastrophic, as all the rivers are already in high flood and the reservoirs are brimming.

“Disaster management authorities have to take all possible measures to relocate people from vulnerable areas to safer locations and arrange for food items, medicines and water for emergency needs to avoid further death tolls,” he told Thomson Reuters Foundation from Lahore, the capital city of Punjab province.

The floodwaters are now rushing southwards into Sindh province.

Sharjeel Memon, a spokesperson for the Sindh government, said from Karachi that the provincial authorities have declared an emergency at three main barrages – Guddu, Sukkur and Kotri – and have asked the Sindh Provincial Disaster Management Authority (PDMA), the Sindh Irrigation and Drainage Authority and the Sindh Irrigation Department to remain on high alert to cope with the emerging flood situation and provide relief.

NDMA officials say they have taken adequate relief measures in flood-hit areas, but this claim has been met with scepticism.

The NDMA said 60 relief camps have been set up, housing 2,800 people. It has distributed nearly 23,000 tents among flood-hit families and provided them with 500 blankets.

But flood relief expert Sattar Zangejo said no substantial aid operations are being undertaken by the PDMAs in Punjab, Sindh and Balochistan, where he has been travelling to survey the situation for international humanitarian groups.

Zangejo worked with Oxfam and Plan International on relief and rehabilitation operations during the last three monsoon floods.

In Punjab, more than 90 percent of people have not received any assistance this time, and have had to relocate independently, he said.

“Despondency among the flood victims fleeing affected areas in Punjab and Sindh provinces was visible on their faces,” he said. “There is a clear absence of arrangements by the PDMAs for food items, medicines, clean drinking water and safe sanitation.”

There may be a bureaucratic reason for the delay in launching relief operations.

On Aug. 17, Ahsan Iqbal, Federal Minister for Planning and Development and Deputy Chairman of the Planning Commission of Pakistan, told media in Islamabad that Rs. 16 billion (about $154.8 million) is urgently required by the NDMA for emergency flood operations.

“The federal finance ministry has been requested to make the required funds available and we hope it will release the funds soon to expedite relief and rehabilitation operations in flood-hit areas,” Iqbal said.