Tourism today is a trillion dollar sector involving the movement of over one billion tourists a year around the world and another five to six billion domestically.

In line with the 2013 United Nations International Year of Water Cooperation, the 2013 theme for World Tourism Day is Tourism and Water: Protecting our Common Future. As the most widely celebrated global day for tourism, it represents a unique opportunity to raise awareness of tourism’s role in water access and shine a spotlight on the sector’s contribution to a more sustainable water future.

FOR Pakistan, tourism can be a massive source of earning as our country possesses top-class tourist attractions from the stunning Himalayan peaks, beautiful lakes, scenic valleys, rich culture, centuries-old civilisations, vast deserts, golden beaches of Makran to all the other natural and man-made attractions.

But unfortunately Pakistan’s tourism potential has largely been untapped and no serious attention has been paid by authorities concerned to make it a major engine of economic growth for the country.

Ironically, the sector was ignored during the previous government’s tenure. The law and order situation in the country has hurt tourism greatly, but what made matters worse is the unnecessary restrictions on the travelling of foreign tourists to various tourist spots. Now foreign tourists need an NOC for travelling to most of the places in Pakistan and it is almost impossible to get this NOC well on time due to lengthy and tedious bureaucratic procedures.

Although security of foreign tourists is a major concern of the government, once they are issued visas, there should not be any extra hurdles in their way to visit places of tourist interest for which they have paid thousands of dollars on air travel and other ground arrangements. We need to facilitate them and provide them invisible security so that they could enjoy their holidays without any fear and worry. On the other hand, we have also not paid serious attention to facilitate our own domestic tourists. There is a large number of Pakistanis who are interested in exploring their own homeland but the dilapidated tourism infrastructure and high cost of board and lodging, coupled with poor standard of services at tourist spots, discourage them to do so.

What we need here is a good tourism policy and full government backing. The new government should prioritize tourism as a leading sector of Pakistan’s economy and help bring the tourism industry back on its feet. We can easily defeat terrorism with tourism by creating income and employment generation opportunities for the insolvent people of far flung areas of KP province and GB where there are no other industries to support their livelihoods. By developing tourism industry, other businesses such as hotels, restaurants, transport, handicrafts, shopping, local recreational spots and local entrepreneurs get simultaneously boosted and it create thousands of new jobs for unskilled and skilled workforce.

A targeted investment strategy by the government, coupled with a sound tourism development policy, can do very well help in addressing these challenges and capitalising on this untapped potential.

Far-reaching policy measures would need to be adopted so that tourists who were scared away due to terrorist activities may be attracted back to revive tourism in Pakistan. 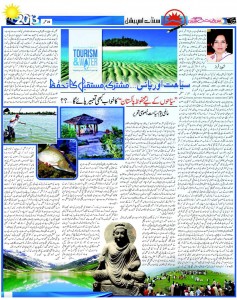