The aspects of changes in local climate that were assessed included the following:

The climate of Shigar can be classified as dry continental Mediterranean. The general

perception of the community members was that the winter season has become milder and shorter, and summer is now considerably warmer. April and May were characterized by moderate temperatures, while summer season was identified as very hot, with temperatures

reaching about 400C in July.

increased from about -250C (5 years ago) to about -120C in the past 2 years. The village head also mentioned that in 1996 the minimum winter temperature fell to -360C. Respondents

further stated that till 5-10 years ago, winter lasted from November till February and now it

starts in December. They added that there is hardly any snowfall anymore, while 10-15 years ago snowfall was a continuous feature in winter. Earlier, pots would break, oil would freeze, and trees and birds would perish during the harsh winter season.

Discussions revealed that about 5 years ago people required several blankets (3–4) to keep them warm in winters, but since the past 2–3 years one blanket suffices the need. The complete

stock of quilts and blankets in each household is no longer required. Further, the community members said that there has been a drastic reduction in the use of woolen clothing and carpets in homes. Additionally, pedestal fans were never needed in summers before, but now they are in common use. Conversely, now few bukharis (heaters) are needed to warm houses.

Change in quantity of fuelwood required for heating in winters

winters, in the past 5 years. According to one village resident, his fuelwood consumption has drastically reduced, from 200 kg to 25 kg.

The main fruit tree species in Shigar are apple, apricot, cherry and pear. A shift in the

flowering time, by about 7–15 days, was reported to have taken place during the past 5-10

between the last week of March and the first week of April.

The study revealed that there are 22 grazing sites for the 22 villages of Shigar Town. In other words, there is one site designated to one village. Permission is needed to use another

The respondents were asked to quantify the number of hours it took to travel to the pastures in 2003, as opposed to in 2007-08. The response to this question was divided. 53% of the persons that were interviewed reported that there has been a change in their travel time; some reported a lengthening of travel time by about 2-3 hours, denoting that they now had to travel to higher altitudes to reach good pastures. However, it needs to be mentioned here that thedisparity in response may be due to the varied locations of the pastures that are used by the respondent. The pastures which are already at a higher altitude may not have undergone any change, while those located at lower altitudes may have dried; hence forcing the communities

to go higher up the mountains.

All respondents reported that the quality and quantity of grass in pastures had deteriorated,

due to a decrease in precipitation since 2005-06. The grass that was waist high earlier was now only knee high. Moreover, 10-15 years ago, livestock grazing took 1-2 hours, but now it takes a whole day. However, one respondent notified that fodder is easily available now, due to early greening of trees. 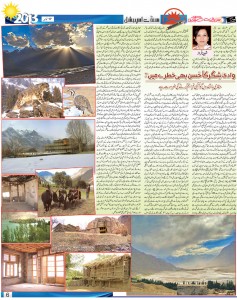