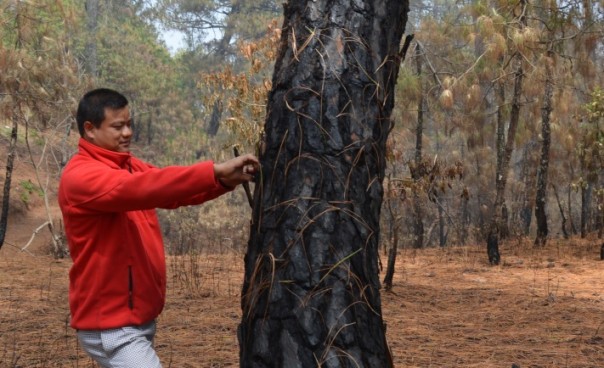 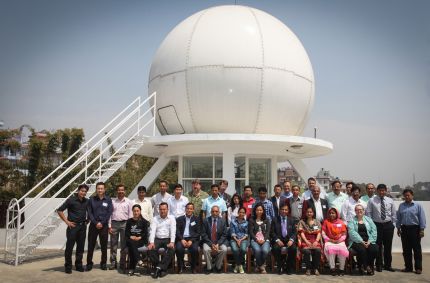 The system, which was piloted in Nepal over the last year, uses active fire data generated by ICIMOD’s MODIS receiving station for near real-time detection of forest fires.

The system is also equipped with an automated alert system, which sends email and SMS notifications to subscribers, including District Forest Officers and focal persons of the Federation of Community Forestry Users in all 75 districts.

The system is the first of its kind in the region, and ICIMOD is planning to implement similar systems in other countries of the Hindu Kush Himalayan region.

Over the three-day workshop, 30 senior officials from Bangladesh, Bhutan, India, Myanmar, Nepal, and Pakistan joined experts from the United States Forest Service, NASA, and SERVIR-Himalaya – an initiative at ICIMOD supported by the United States Agency for International Development (USAID) and NASA – to receive a two-day technical training on operational forest fire detection and monitoring systems equipped with SMS and email alerts.

The training was followed by a day-long discussion on policy, which helped identify gaps in technology, capacity and policy in the Hindu Kush Himalayan region and foster regional cooperation for improving forest fire management. The workshop was organized by ICIMOD under the SERVIR-Himalaya Initiative in close collaboration with United States Forest Service (USFS). It was supported by USAID and the US Department of State.

Dr. KC Poudel, Secretary of MoFSC, emphasized the importance of the workshop, and the need to develop forest adaptation strategies under changing climate scenarios that evaluate available mitigation and adaptation options and identify policies and instruments to support adaptation.

“Changing climate scenarios call for different approaches to forest resource management. The technology and know-how on geospatial support systems that ICIMOD and its partners have shared with the Ministry and other relevant departments will play a major role in improving the management of Nepal’s valuable forest resources,” Poudel said.

“The US Forest Service is pleased to participate in the workshop and share geospatial technology experiences with the countries of the HKH region. Despite differences in geography and culture we share many of the same needs for robust geospatial solutions. The result is responsive and sound forest fire management’ said Brian Schwind, Director USFS Remote Sensing Application Center.

“This workshop is an important step in strengthening the capability of countries in the Hindu Kush Himalayan region to better manage forest fires. ICIMOD is excited to be involved in developing and sharing innovative geospatial systems to provide timely reporting of forest fire incidence in the region along with the support and technical collaboration of USAID, NASA the US Forest Service, and the US Department of State,” said Dr. Eklabya Sharma, Director of Programme Operations at ICIMOD.

In addition, ICIMOD announced that the 2010 Nepal Land Cover Database will be made available to the public for validation through a crowd-sourcing application on the Centre’s online Mountain GeoPortal. Basanta Shrestha, Regional Programme Manager of the Mountain Environment Regional Information System (MENRIS) programme at ICIMOD, said.

Dr. MSR Murthy, Geospatial Solutions Theme Leader at ICIMOD, said, “With validation from its end users, the interactive mapping system will serve as an important information asset in the natural resource sector”.

The story first published in Lahore Times on April 12, 2013.