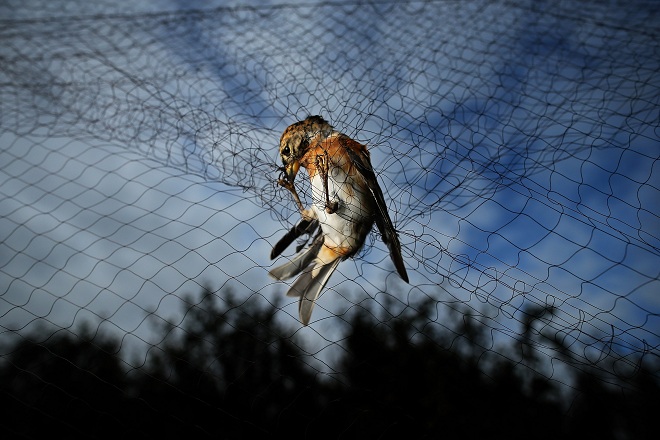 SPURN HEAD, ENGLAND – OCTOBER 11: A Brambling is caught in a mist net erected by British Trust for Ornithology (BTO), volunteers at Spurn Point coastal reserve on October 11, 2012 in Spurn Head, England. The BTO office at Spurn undertakes vital research by capturing migrating birds in mist nets and Heligoland nets before weighing, sexing and recording the birds details to provide long-term monitoring of bird populations and migration. The Spurn Point coastal reserve has been managed by the Yorkshire Wildlife Trust since the 1950’s after it was purchased from the MOD and comprises of a three and a half mile long, narrow and curving peninsula made up of a series of grassy sand and shingle banks, and mudflats. The reserve which is only 50 metres wide in places lies on the northern bank of the Humber Estuary where the North Sea meets the Humber River and is significantly affected by coastal erosion. Due to Spurn’s location, it is one of the country?s key areas for ornithological observation, as it is the first land for many migratory species on their way over the North Sea to Scandinavia and beyond. Birdwatchers gather during autumn when they are likely to see an array of different migratory birds including Bramblings, Redstarts, Sparrow hawks, Shrike, Short Eared Owls Storm Petrols, Gannets, Knot and Oystercatchers. Rarer species are also common sightings including Radde’s Warbler, Nightingale and Firecrest. (Photo by Dan Kitwood/Getty Images)