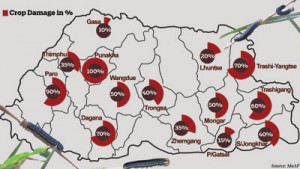 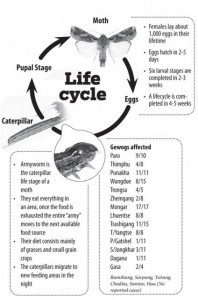 While the infestation of the ‘army worm’ (Spodoptera spp) appears to be going beyond green foliage to drains, footpaths and retaining walls, its spread in paddy fields has been brought under control, say plant protection officials.

“We’ve been distributing chemicals (pesticides), and advising farmers to carry out top dressing of urea after paddy transplantation,” National Plant Protection Centre (NPPC) program director, Dr Doe Doe said. “This has been effective in checking the rapid spread of army worms and quick recovery of crops.”

Topdressing refers to addition of fertilisers to crops during the growing season, in order to improve plant nutrition and boost yields.  So far, NPPC has distributed 715.40 litres of pesticides.

The paddy transplantation season has begun in some parts of the country and will soon begin elsewhere.  Paddy seedlings are first grown in seedbeds, before they are transplanted in properly ploughed and heavily watered fields.

Dr Doe Doe said even though army worms had been feeding on crops much earlier, farmers did not report the case to agriculture officials, because the affected crops regenerated fast.

Cases of affected crops from 14 dzongkhags, mainly paddy nurseries and maize, were reported only on May 20, when the army worms were seen in large numbers.

“There’s no reason for farmers to panic, as affected crops, particularly paddy seedlings and maize, are showing good recovery,” Dr Doe Doe said. “There are a few households, who have been severely affected, but recovery is fast, and we’re distributing free seeds for alternate crops.”

“It occurs every year but, this year, it’s been at the same time and attributed to the abnormal spring weather phenomenon that we experienced,” he added. “The army worms feed mostly on leaves, without effecting the bud, which can regenerate, and it’s just for a stage (3-4 weeks), after which the worm transforms to moth.”

Ganesh Chhetri said that they usually discourage farmers from using chemicals, which is why it is never stocked in the dzongkhags. “But, this time, using chemicals was the only immediate solution,” he said.

Asked about the possible ecological problems due to large-scale use of pesticides, agriculture experts said, in the wake of the rapid spread of the army worms, they were left with no other option.  Precaution, officials said, would be taken to reduce the impact.

Agriculture officials have advised farmers to closely inspect their crops for army worm infestation. “Earlier, around first week of May, the army worms were few in numbers and could be manually plucked off the plant, but then within weeks, it multiplied in numbers,” a farmer in Punakha said. “Agriculture officials are helping us, and we hope it won’t further affect our paddy cultivation.”

Farmers in Nubi gewog of Trongsa say the pesticide does not appear to kill the worms.

A 33-year old farmer from Bemji said her family availed pesticides twice from the gewog agriculture centre in the village and they sprayed it in their paddy sapling fields but the worms reappear after a few days.

“The worms have not only eaten all the paddy saplings from the root but also the vegetables and wild,” she said.

Armyworm or Spodoptera frugiperda infestation has so far spread across 14 dzongkhags, within a few weeks of the first incident, damaging acres of paddy saplings and other crops.

Punakha was the hardest hit, with 100 percent damage in all 11 gewogs. However, officials said about 80-90 percent of the affected crops are recovering.

They will eat everything in an area and once the food supply is exhausted the entire “army” will move to the next available food source. In the east, it was mostly the maize growers that were affected.

In the past week 16.40 acres of paddy and chili saplings of 136 households in Kawang, Mewang, Chang, and Genekha gewogs under Thimphu district have been affected.

Of the 10 gewogs in Paro, nine have reported cases of the pest and collected about 173 litres of pesticide, the largest amount so far among affected dzongkhags.

Sarpang, Tsirang, Chukha, Samtse, Haa, and Bumthang dzongkhags have not reported any cases until yesterday.

Agriculture officials said the infestation is under control and continues to monitor the situation. They advise farmers to spray chemicals only if the damage is severe.

“There is no need to panic, because the worm eats only the flesh part and in most cases the plants would grow again,” chief agriculture officer Chimi Rinzin said. “We encourage wet-bed nursery in the following seasons.”

Agriculture officials said, with the early arrival of warm dry weather, followed by rain in spring, it favoured reproduction and multiplication of army worms. “Usually it occurs later in the season, when natural predators, parasites and pathogens, like viral, fungal and bacterial, are present abundantly,” agriculture specialist, Ganesh Chhetri, said.

The worms have not affected wet-bed and tray-paddy nurseries, and those transplanted early. Maize saplings shorter than 30cm were affected while older saplings were not harmed.

Agriculture officials said the early arrival of warm dry weather followed by rain in spring created a favourable condition for reproduction and multiplication of armyworms.

“Usually they occur later in summer when more of its predators, parasites and pathogens are present abundantly to keep it in check,” a ministry official said.

Dagana dzongkhag has gotten rid of the pest that hit the fields in four villages in three gewogs without spraying chemicals.

“The weather conditions improved, there was no rain so the infestation is under control now,” agriculture officer Passang Dorji said.

Dagana was one of the first dzongkhags to report damages by the pest a month ago.

The last outbreak was reported in Mongar and Thimphu in 2009.

In Wangduephodrang the outbreak was first reported in Dangchu gewog on May 10, where nursery of 32 households of Ridha chewog were damaged. It is, however, said to be under control.

Farmers said the worms disappeared during the day and fed on the saplings during the night and they spotted the worms only in the morning.

The national plant protection centre in Semtokha distributed a little over 715 litres of chemicals to nine dzongkhags to combat the pest.

Senior meteorologist with the department of hydromet services, Tayba Buddha said it’s a transitional season from winter to summer, and so not an abnormal spring weather condition.

A comparison of the mean temperatures for Paro dzongkhag for the month of May in the last 17 years did not show much difference in the temperatures. But when the minimum temperatures were compared, this May for Paro is cooler by -2.3 degree Celcius, he said.  But the change in weather is not due to Cyclone Mahasen that hit Bangladesh last week.

In Punakha, farmers are desperately waiting for sunny days for their paddy saplings to recover in time for transplantation in a fortnight.

Some of the farmers have resorted to performing rituals and propitiating deities to get rid of the worms.

“It actually worked as the worms have abandoned our fields,” a farmer from Trongsa, Kezang Dem, said. 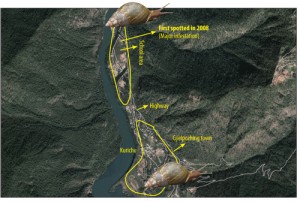