The Capital Development Authority (CDA) is currently working on an estimated US$12 billion mega-project which includes building a twin capital across the Margalla Hills, connecting the two with a tunnel. Prime Minister Nawaz Sharif, despite severe opposition from politicians and members of the civil society, has directed CDA to continue working on the project.

The Supreme Court has also taken a suo motu notice of the project and sought replies from the government. 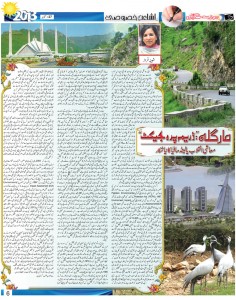